Design a site like this with WordPress.com
Get started

Andrew L. Baughman (Director of Fine and Performing Arts, Musical Theatre) is the Producing Artistic Director of The Landless Theatre Company and an Associate Artist with Maryland Ensemble Theatre. He works regionally as an actor, director, musician, playwright, and arts writer. Notable among his credits, Baughman played the title role and served as a co-arranger for the multiple Helen Hayes Award nominated “Prog Metal Version” of Stephen Sondheim’s Sweeney Todd. andrewlloydbaughman.com

Maggie Lewis (Visual Art) received a B.A in Fine Arts from University of Maryland, College Park with a minor in art history. She is currently teaching Kindergarten through Eighth Grade art at St. John’s Episcopal School in Olney, Maryland. She enjoys teaching art and working with students to bring out their creativity in the art room using mediums such as acrylic painting, drawing, ceramic sculpture, mixed media, and more.]

Dr. Andrei Pitkivka (Woodwinds) is a critically acclaimed educator and performer with twenty years of teaching experience, seven years at the university level, seven years at the high school level and nine years at the middle school level; provides workshops and master classes throughout the United States, Asia and Europe; flute maker of a variety of folk flutes of his native Ukraine, whose sounds have attracted listeners at concerts, festivals and educational workshops across the United States, Europe, Asia and South America; multiple appearances and performances on recordings in support of soundtracks for Broadway, Disney, The Lord of The Rings, Medieval Times, etc.; Eastern European background with extensive world music research keep him in demand as a recording artist and a maker of folk flutes. andreipitkivka.com

Kevin Carroll (Dance) holds a BFA in dance and choreography from VCU. He was born and raised in Norfolk, Virginia where he started dancing at the age of 16. Kevin’s training consists of classical dance, commercial, modern, and contemporary. He has worked as a dance assistant teaching high school students modern dance, and has worked at several studios as a dance instructor. Kevin has a passion for using dance to help vulnerable young people express themselves and boost their self-esteem. 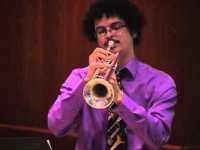 Jeremy Milliner (Brass) received his BA in jazz from the University of Maryland, College Park and has been actively teaching since 2003. He teaches privately, but also through Music and Arts in both Germantown and Rockville. He also works sectionals and live demos with schools in the Montgomery County area.

Denis Malloy (Reed Specialist) is a versatile clarinetist, bass clarinetist, saxophonist and composer happily making diverse music in the Washington D.C. and Baltimore metropolitan area. He records and performs in a wide range of styles including classical, jazz, middle-eastern, cabaret and rock. Denis has performed with the Summer Opera Company in Washington, D.C., the AIMS Symphonie Orchester in Graz Austria, and the Concerto Soloists of Philadelphia and is currently a member of The Georgetown Quintet. In the non-classical vein, he has performed with his own jazz duo, trio and quartet for various events and functions at venues including the Library of Congress, the Baltimore Museum of Art and the Peabody Library. As a composer and improviser, he has composed music for several Silent Era films, both as an individual and in collaboration with the band Boister. He has performed live accompaniment to silent film at the Kennedy Center, American Film Institute (Silver Spring, MD), Charles Theatre (Baltimore, MD), Patterson Theater (Baltimore), Avalon Theater (Easton, MD), Baltimore Museum of Art, Walters Art Museum (Baltimore), and the Virginia Film Festival, among others. Denis appears on more than a dozen CDs, including two with Boister produced by respected producer Jim Dickinson. Recordings by Persian Flamenco group The Roya Ensemble, Boister, and his independent project TreeHouse Quartet, are available at CDBaby and iTunes. He is a graduate of the Peabody Conservatory of Johns Hopkins University. 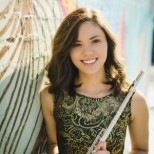 Erica Spear (Elementary General Music, Flute and Piano Specialist) is an emerging flutist and educator. A graduate of the Hayes School of Music at Appalachian State University, she obtained her Bachelor of Music Degrees in Flute Performance and Instrumental Music Education.  In 2014, she completed a short study of Irish Trad music at the University of Cork (Cork, Ireland). Subsequently, she spent a semester studying solo performance and chamber music through the Institute for the International Education of Students (IES) Abroad, in Vienna, Austria.

Paige Friedeman (Dance) has been dancing since the age of 5 and danced with her High School’s competitive dance team, earning several dance honors and captain awards. Paige started choreographing around the age of 12 and hasn’t stopped since. She continues to take classes to push herself to be the best dance and teacher possible. Paige continues to perform and dance with local area dance crews and companies as well as videos. In college, Paige was an Art Studio Major at the University of Maryland and currently has her artwork in exhibitions in the Metropolitan DC area as well as doing work as a Muralist. Paige began coaching competitive dance teams in 2002 and has had teams win several local, regional and national titles. She had been the Dance Director for 3 All-Star Competitive Cheer & Dance gyms. Paige spearheaded the ACRO program at SBA and is a certified teacher with Acrobatic Arts. She also helps out with social media marketing and fundraisers for the studio.

Fran Vielma (Drums) is an in-demand multi-percussionist, composer, and educator,

whose esthetic integrates extensive knowledge of Venezuelan, Caribbean, South American music styles and beyond, the nuance and variety of concert music, as well as the freedom of jazz. Vielma’s latest release -Tendencias with the Venezuelan Jazz Collective represents his personal vision of contemporary Venezuelan Jazz made in NYC, and it was included on the Best 2018 Releases’ list by the NYC Jazz Record, Downbeat Magazine & Latin Jazz Network. As a performer, arranger, and orchestrator, Vielma has been involved in recording projects, tours, and festivals in three continents. His scholarly interests on the musics of the world and jazz have allowed him to offer seminars, lectures, and master-classes around the US and Latin America.

Priyant Sundas (Guitar) graduated from Berklee College of Music (Boston) on the Dean’s List with the Asian Scholarship Award. He has been teaching music for over 10 years to individuals of various age groups and diverse learning capabilities. Sundas has designed and mentored Hindustani Classical Music for World Guitar, and has been a recipient of an Award for extraordinary contribution in the field of music. Sundas has also been an active studio session player as well as a live performer, and has performed with various global artists. Priyant Sundas’ official YouTube channel: https://www.youtube.com/channel/UCQseX2rINS9pjI_XLIXTBjA

Allison Gosney (Voice) has had an extensive love of music from a young age. She grew up with a passion for musical theatre, including performing Godspell at the Hobby Center in Houston, TX and Lucy in You a Good Man, Charlie Brown. Her opera appearances include Susanna (Le Nozze di Figaro), Anina (La Traviata), Frasquita (Carmen), and Second Lady (The Magic Flute). She has performed as the soprano soloist in Mozart’s Missa Brevis in d Minor and Vesperae Solennes de Confessore, Rutter’s Requiem, and Britten’s Rejoice in the Lamb, and Handel’s Dettingen Te Deum. She recently premiered Gary Fry’s Awake, Celestial Airs! under Conductor Duaine Wolfe at Carnegie Hall and won First Place: Upper Division at the CNYFL NATS competition. She received her Master of Music from the Crane School of Music at SUNY Potsdam and her Bachelor of Arts in Music and Bachelor of Science in Economics from American University. She is a member of the National Association of Teachers of Singing.

Krisie Allen (Dance), owner, founder and choreographer of Dancin’ 4 Ever hopes to inspire and instill in others her passion and love of dance.  She has a lifetime of experience, including numerous competitions in The Washington Metropolitan area, New York City, and the Steel Pier in Atlantic City with Tony Grant Stars of Tomorrow.  With a degree in education and 13 years as an elementary school teacher, she returned to her first love…the love of dance. 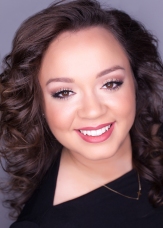 Coraine Tate (Voice) appeared as one of ten singers in Carnegie Hall’s Songstudio Young Artist Program under the direction of Renée Fleming.  Her numerous concert appearances include The Conservatory Project Recital Series at the John F. Kennedy Center for the Performing Arts, Oregon Bach Festival, Songfest at the Colburn School in Los Angeles, Arts Renaissance Tremont Series, and collaborations with Cleveland Orchestra members including organist Todd Wilson and clarinetist Frank Cohen.In film, she received national attention for her solo performance at the Trondheim Nidaros Cathedral of This Little Light of Mine in the PBS Special: Christmas in Norway with the St. Olaf Choir. Ms. Tate has been the recipient of several awards including the Elizabeth Stoeckler Stevens Prize in Lieder and Irvin Bushman Memorial Prize for Singing. She placed first in the Advance Women’s Category: Buckeye Ohio NATS and received the Richard Miller Award for Excellent Singing: Buckeye Ohio NATS. A native of Columbus, GA, Coraine holds degrees in Voice Performance from St. Olaf College and an Artist  Diploma from the Cleveland Institute of Music.

Emma Hebert (Choreographer) is a professional actor, dancer, and teaching artist in the DC area. She has been working at Round House Theatre Education since the age of 17, and after graduating from the University of Maryland with a BA in Theatre she completed their Education Apprenticeship Program. She has directed, choreographed, and taught dance and drama to students of all ages at various other organizations in the area, including Imagination Stage, Joy if Motion Dance Centers, Encore Performing Arts, Young Artists Of America, and Everyman Theatre.  She has also performed professionally at several theatre companies in the DC area, such as Synetic Theatre, Mosaic Theatre, and most recently with Round House Theatre in a coproduction with the Getty Villa in Los Angeles!